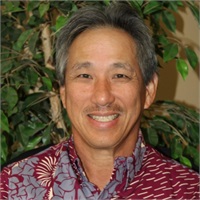 CFO of YeeCorp Financial, a registered representative of SCF Securities Inc. and Investment Advisor Representative of SCF Investment Advisors. His primary location is in Lihue, Kauai with an office in Honolulu, Oahu. He has been a leader in the financial services industry for more than 28 years advising clients in the management of their investments. Gordon focuses his efforts in asset management, estate, and retirement planning. He has been voted Best Insurance Agent in the Garden Island newspaper Best of Kauai in 2004 and 2012 and *Five-Star Wealth Manager in 2011, 2012, 2013, and 2016. Gordon is a 6-year member of the Million Dollar Round Table (MDRT) since 2005 reaching "Top of the Table" in 2009 and "Court of the Table" in 2007 and 2010.

He currently resides in Kauai with his wife, Yolie, and has three sons - Tyler, Maika, and Kala. Gordon enjoys teaching Kajukenbo and Junior Achievement at Kapaa High School. He is active in non-profit organizations, sitting on the advisory board for the Hawaii Food Bank, in addition to volunteering at the Love One Another soup kitchen. Gordon can be reached at ext. 25.